Self harm and negative attitudes amongst nursing staff

Abstract Background The attitudes held by clinical staff towards people who harm themselves, together with their knowledge about self-harm, are likely to influence their clinical practice and hence the experiences and outcomes of patients. Our aim was to systematically review the nature of staff attitudes towards people who engage in self-harm, including the factors that influence them, and the impact of training on attitudes, knowledge and behaviour of staff. Methods and findings A comprehensive search for relevant studies was performed on six electronic databases. Two independent reviewers screened titles, abstracts and full reports of studies, extracted data and gave each paper a quality rating. Received Jul 27; Accepted Jan This is an open access article under the terms of the Creative Commons Attribution License, which permits use, distribution and reproduction in any medium, provided the original work is properly cited.

It has been estimated that over people die due to suicide every year and for each adult who died of suicide there may have been more than 20 others attempting suicide World Health Organization In Finland, the indirect financial cost defined as the value of lost production due to premature mortality as a result of suicide among working population, is estimated to be several hundreds of million euros per year OECD Of equal importance to better treatment outcomes is the emphasis on the removal of obstacles that prevent patients from seeking treatment in the first place, or adhering to it.

In their suicide prevention report World Health Organization outline fighting stigma as one of the ways forward in suicide prevention. When it was examined how patients themselves view their treatment, their reports often indicated that staff attitudes are negative, and their behavior towards patients was punitive National Institute for Clinical Excellence NICE To sum up, improving attitudes of personnel towards patients who engage in SIB ought to minimize avoidance by personnel and enhance their desire to work with these patients.

Stereotypes and attitudes are considered as distinct cognitive structures, each of which represents a part of a person's complete base of knowledge about a particular group.

Stereotypes are instituted in children's memories before the development of the cognitive flexibility to critically assess the validity of a stereotype. Attitudes — propositions that are accepted as being true — however are newer cognitive structures.

They can differ from what one knows about a particular group and from the affective reactions towards that group. According to Devine and Elliotstereotypes and attitudes are activated by different cognitive processes. These processes in turn enable both the intentional inhibition of the automatically activated stereotype and the activation of an attitude.

This change has been studied in terms of conditions under which people are persuaded by others. Johnson and Eagly specified that different types of involvement exist and they have different effects on persuasion.

Those who are less involved however, tend to favor weaker arguments. This attitude change process is likely aided by strong argument persuasion of involved subjects.

Participation in the training was voluntary but the places were limited to 50 participants. 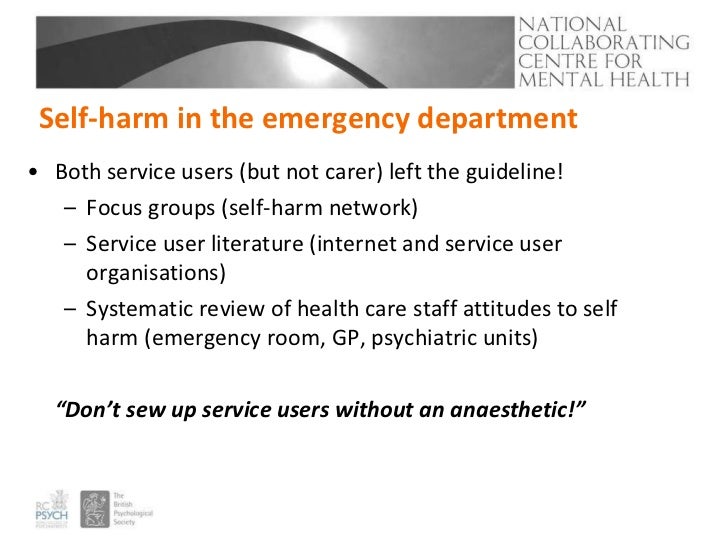 All 50 participants returned the questionnaire.The more negative attitude expressed towards repeated attempters of self-harm, which is really alarming as this population has significantly higher risk of subsequent self-harm.[20,21] This highlights the importance of increasing the knowledge and understanding of health professionals’ about patients with self-harm.

Purpose. The purpose of this study was to examine emergency department (ED) nurses’ attitudes towards individuals presenting with deliberate self-harm (DSH), including the relationship between attitudes and factors such as age, academic achievements, length of experience, and self-harm .

Published: Tue, 26 Sep Risk management in mental health settings is currently a hotly debated issue. This paper offers an insight into the issue of self-harm and negative attitudes amongst nursing staff.

Inpatient nursing staff generally demonstrated positive attitudes towards self harm, however being a healthcare assistant, or from a non-white ethnic group were associated with more negative attitudes, as were lower SF scores. Patients who self-harm report negative staff attitudes toward them on presentation to an emergency department.

Applying a thematic framework analysis to interviews with 10 staff members from one.